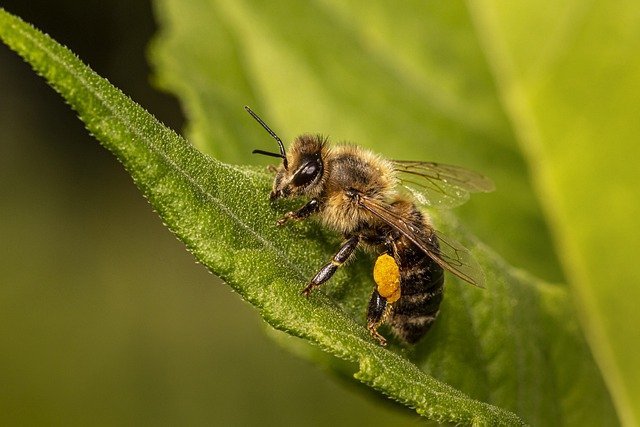 2021 was a bit woeful on the bee front to start with. On the first bright days of the year, when the bumble bees were up and about, I took a peek at our hive. Sadly there was no sign of any activity and when I plucked up the courage to lift off the lid I found a scene of utter devastation. All the bees were dead, a mountain of them clustered around the centre of the hive. My heart sank. There was plenty of food so it must have been the way I’d stacked the hive for the winter – realising this was probably my fault made me feel even worse.

We were super busy getting ready for delivery of a static caravan for my mum, so the poor bees had to stay put for a while. Salvation came in May when to my delight a good beekeeper friend of mine offered me a new colony.
I set about clearing the little corner around the bee stand, including strimming – bees don’t like strimmers so it was an opportunity not to be missed whilst there were no bees. Or so I thought. Was that a honeybee I saw from the corner of my eye? I daren’t even dream, but as I stood and watched, sure enough, three or four bees were coming and going from the old hive. Where there’s life there’s hope.

The day came for the new bees to arrive and once they were safely installed in their new home my friend and I checked out the old hive. Astonishingly, all the dead bees (well, nearly all) had been cleared away and there was a small colony of honeybees happily going about their business. Euphoria doesn’t quite sum it up.

For the first time I had two hives… I felt like a proper beekeeper. But alas it was not to last. As a complete novice I failed to spot the signs that my new bees were preparing to swarm, even when there were so many it was hard to get the lid back on. Just a few weeks after they arrived the new bees swarmed, and half of them decided to make their new home in our chimney pot. Had they been in the loft or roof space somewhere we’d have left them to it, but the chimney was felt to be a step too far so a fire was lit in the grate and we began what turned out to be a two day campaign to persuade the bees to leave. We were in the middle of a heatwave (of course we were) which meant I had to lay on the cool tiles of the hall to keep an eye on the fire. Eventually, when Dave lit a barbecue under the chimney outside, the swarm decided our pot was not the des-res it initially promised to be, and took off up the drive in search of somewhere new. I had hoped to find and recapture them but it was not to bee.

The two colonies both did quite well through the summer but with both being seriously depleted it was felt that merging the colonies would give them the best chance of making it through the winter. I was delighted to spot the queen in the new colony, and with my friend’s help we stacked the two brood boxes together, separated by a sheet of newspaper. The purpose of the newspaper is to slow down the meeting of bees from different colonies and allow time for their different ‘scents’ to mingle in the hope they don’t all kill each other!!

I didn’t take any honey this year as I felt that the merged colony had been through enough and deserved to keep what they’d worked so hard for, but after merging there was one small frame that wouldn’t fit back in the hive so a little treat for us too. The first we’ve had; I’m sure I didn’t treat it properly – I just sieved it into a jar, it’s delicious!!!